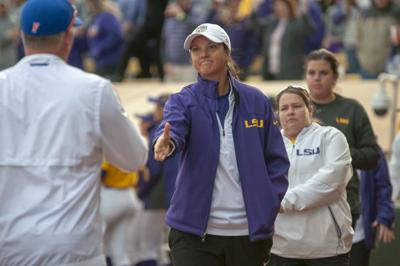 On Tuesday, LSU softball defeated ULM at home in a 7-5 contest in Tiger Park. The No. 15 team’s win marks Head Coach Beth Torina’s 400th win at LSU. The Tigers now sit at 19-11 on the season.

Coming into her tenth season as head coach, Torina has brought the Tigers more success than any other LSU softball coach. She averages 45 wins per season and has led the Tigers to rank in the Top 10 for the last six straight seasons.

“It's awesome, and it's cool for a lot of reasons to know that the same staff was working for every single one of them is amazing, and then, think about all the women that contributed to this program that just really lived and died for purple and gold. I didn't play in any of the games, all I did was sit back and watch,” Torina said. “We've had some phenomenal women that have done some amazing things for this program and truly given their heart and soul, so it's been awesome to be a part of. Hope we can get 400 more here at LSU. I'd love to watch them play for 400 more.”

Torina came to LSU prior to the 2012 season and has taken the Tigers to the Women’s College World Series for four years since her time in Baton Rouge. She has also collected two 50-win seasons and five 40-win seasons within nine years.

LSU’s head coach has even established an active community service function within the softball program as the Tigers often visit schools and hospitals in Baton Rouge. She is personally involved in the program's annual “Strikeout Ovarian Cancer” event where LSU wears teal jerseys to support the cause of spreading ovarian cancer awareness. Torina's mother, Betty Dieter, is a seven-year ovarian cancer survivor.

The Tigers will return to conference play on Thursday in Tiger Park for a three-game series against Ole Miss. Thursday and Friday’s games will begin at 6 p.m. CT and Saturday’s game at 1 p.m. CT.

“We want to win the World Series. I never know any of these milestones until they happen. It’s the last thing I’m ever thinking about. I’m watching film, trying to get hitters out, and trying to figure out how to best prepare a team. But the biggest milestone we want to win is a National Championship.”