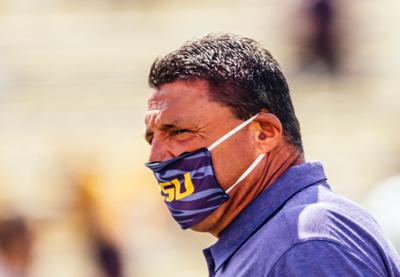 LSU football had a practice fit for the times on Tuesday.

Punter Zach Von Rosenberg played second-team quarterback. Defensive linemen tried their hand at long snapping. Freshmen and walk-ons who have yet to see the field were getting first-team reps.

Ed Orgeron called it “one of our best practices” in his weekly teleconference. He said Von Rosenberg even threw a touchdown.

“The whole team was cheering,” Orgeron said. “Seriously, it was good!”

Orgeron said he doesn’t know much about the Halloween party that reportedly infected at least four LSU Tigers with the coronavirus, quarantined many more and postponed the Tigers’ game against Alabama.

Should LSU fans be required to get COVID-19 testing for game day?

LSU’s game against Florida has already been pushed back to Dec. 12 by an outbreak among the Gators, leaving no open dates on the Tigers’ calendar. In a season of chaos, the Southeastern Conference will now have to get creative to reschedule LSU-Alabama.

No one knows if, or when, one of the most anticipated games of the college football season will be played.

“Your guess is as good as mine,” Orgeron said on Wednesday’s teleconference. “I’ve heard a lot of things. Which, I don’t know. But whenever they tell us to play, we’ll be ready to play.”

For now, the Tigers are prepping for Arkansas, unless the virus gets in the way of that game too.

“You cannot be confident in anything, but from what I’m told our quarantined guys will be back sometime next week,” Orgeron said. “We’ll have more players at practice, and I think Tuesday or Wednesday we should have more of an answer on that.”

“We are disappointed there will be no football in Tiger Stadium this weekend,” LSU Director of Athletics Scott Woodward said in a statement. “But, we will always prioritize the health and wellness of our student-athletes. We will continue to follow the league’s protocols in order to safely and responsibly return to play.”

The conference said it may reschedule regular season games on Dec. 19. LSU’s two postponed games are against the two teams, Alabama and Florida, widely expected to play for the SEC Championship, also scheduled on Dec. 19.

“We began the season with the understanding interruptions to the schedule were possible, and we have remained focused throughout the season on the health of everyone around our programs,” SEC Commissioner Greg Sankey said. “We must remain vigilant, within our programs and in our communities, to prevent the spread of the virus and to manage activities that contribute to these interruptions.”

LSU’s COVID-19 outbreak headlined a difficult week for the SEC. On Monday, the conference had seven games scheduled for Saturday. By Wednesday, four were postponed — LSU-Alabama, Georgia-Missouri, Texas A&M-Tennessee and Mississippi State-Auburn. If any of those games have to be canceled to account for past and future virus outbreaks, the conference and schools involved will face significant financial consequences.

“You’re troubled by what’s happened this week with our postponements,” Sanky said, “But we have to adjust further within our programs. I’m certainly shaken but not deterred.”

Take LSU, for example. In 2018-2019, Joe Burrow’s first season with the Tigers, the football program pocketed $56.6 million, earning $36.3 million in ticket sales for an average of roughly $6 million per home game, per a report by The Advocate.

This season, LSU was slated to host five games, down from the normal six. Capacity is capped at 25%, meaning that ticket sales will total an estimated $1.5 million each game.

The program lost one game to Hurricane Delta, and is now in danger of losing another one to the coronavirus, with two more left. If the Tigers play only three home games, they will make only $4.5 million in total from those games, a steep drop from the $36 million they expect to earn in a normal year.

Factor in the impact of a lost Alabama game on the Baton Rouge economy and its restaurants, bars, hotels and shops, and the toll grows. At the end of October, LSU athletics announced layoffs and pay cuts to mitigate an estimated $80 million in total losses.

“This is a fluid deal, but those guys have done a tremendous job of getting us to play,” Orgeron said. “I’m happy we’re playing, we knew this stuff was going to happen this year, so whoever they tell us to play, we’re gonna be ready.”

It would have been easy to punt on the Alabama game entirely, but both schools need to play it. And as of now, they will. But if 2020 has taught us anything, it’s how quickly things can change.

It was on Monday when doubt first crept in about the status of the Alabama game. Monday was also a year to the day when Joe Burrow and Clyde Edwards-Helaire stormed into Tuscaloosa, smashed the Crimson Tide and rode the wave of a dream season to a national championship.

Today, LSU is 2-3. Its defense is a mess. Its starting quarterback is out for the year. Its fanbase is clamoring for the program to send Bo Pelini a $4.6 million buyout. Its athletic department is hemorrhaging money. And it might finish a season without playing Alabama for the first time since 1963, when Orgeron was a toddler and Nick Saban was in the seventh grade.

“We look forward to the rescheduling of the game against Alabama,” Orgeron said. “We want to play Alabama. It’s a great rivalry for us and we want to accept that challenge.”