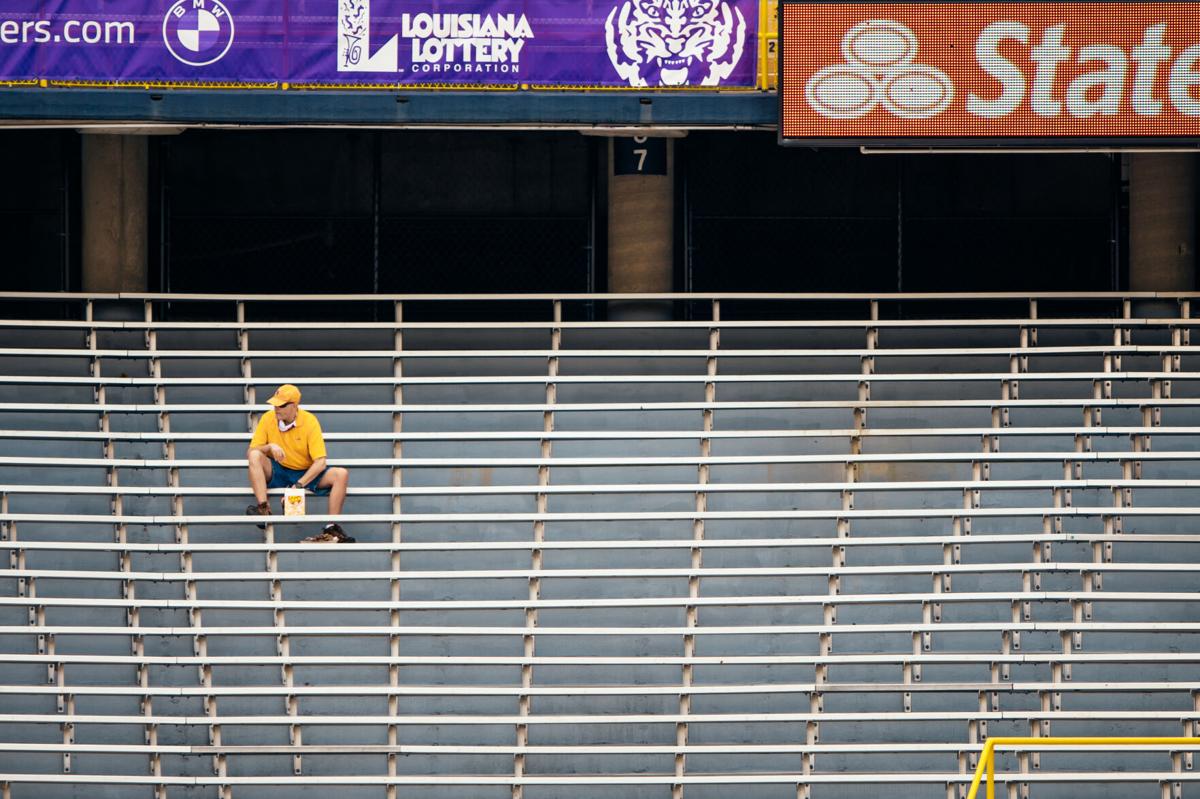 An LSU fan waits for the game to begin Saturday, Sep. 26, 2020 before LSU's 44-24 loss against Mississippi State in Tiger Stadium. 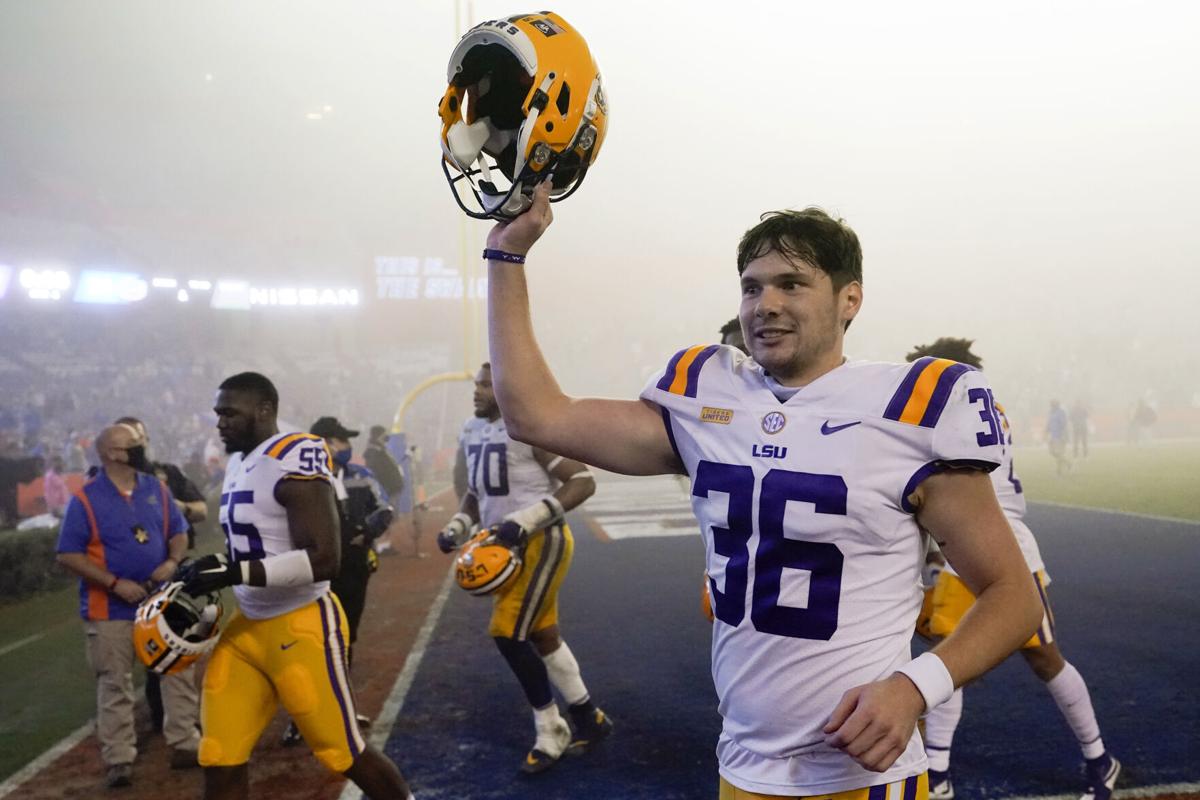 LSU's Cade York (36) celebrates as he comes off the field after kicking a field goal against Florida in the final minute of an NCAA college football gam Saturday, Dec. 12, 2020, in Gainesville, Fla. LSU won 37-34. (AP Photo/John Raoux) 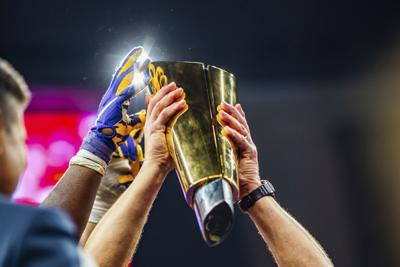 Rabid fans dressed in purple and gold lined along the fence at the Baton Rouge Metropolitan Airport awaiting the return of their heroes from Atlanta after the SEC Championship and the College Football Playoff Semifinal. Those same enthusiastic fans ushered their Tigers along Nicholson Drive on their way to the National Championship in New Orleans with thoughtful signs and loud cheers. The bright, glowing image of Joe Burrow with the elusive Heisman trophy was displayed proudly on a Times Square billboard.

And then it happened. The greatest team in college football history beat Clemson on a 35-8 run to finish out the season of LSU’s dreams. Triumphantly raising the golden trophy over their heads, the Tigers rested, completely unaware of the unforgiving future ahead.

Joe Burrow’s senior season is unmatched in college football history, and his bravado and swagger may be unmatched as well.

Before this year’s season began, Head Coach Ed Orgeron went as far as to say that this team could be even better than last year’s, specifically on one side of the ball.

“We are so much better on defense right now than any part of the season last year,” Orgeron said at the beginning of fall camp.

Since those whimsical days in December and January, the world has experienced a pandemic, a high degree of racial tension and unprecedented political turmoil. Wednesday, Jan. 13, marked one year since LSU completed its season and achieved “legend status—” one year since cruel, ruthless 2020 genuinely began for the state of Louisiana.

The team suffered beatdowns from Auburn and Alabama and had to swallow upsets from lowly Mississippi State and Missouri. It was far from what both players and fans expected after coming off the previous season.

But fear not — all is not lost. We were reminded of that with a season-saving win over Florida in dramatic fashion. Give credit to Marco Wilson’s great shoe throw and Cade York’s tremendous 57-yard game-winning kick for the LSU win, but Orgeron was well aware of what the win truly symbolized: resilience.

“I saw great practices,” Orgeron said. “I saw want-to. I saw who was coming early to meetings. I know these guys like my kids. I know they were hurt on Monday, but we said, ‘You know what? We’re gonna beat Florida in The Swamp.’”

“Throughout the whole year it was ‘almost,’” senior JaCoby Stevens said. “‘We almost had this’ or ‘we almost got that,’ and this time we finally got it and have something we can build around and something we can grow from.”

Followed by an electric shootout with Ole Miss in the last week of the regular season, Orgeron’s program had finally gathered enough momentum to salvage the pieces from the hurricane that ripped down Nicholson Drive, finish over .500 and find a few moments from this season to be proud of.

“I think that throughout the season our team became tougher,” Orgeron said after the Ole Miss win. “Our coaching staff became closer. We continued to fight. Went through a lot of adversity. There were some games we didn’t play very well, but we came back and we fought and we finished strong. That’s what I’ll remember about this team.”

Make no mistake, this season did not all go according to plan. The overhaul of Pelini getting fired and Steve Ensminger stepping down from his offensive coordinator post showcases how displeased Orgeron was with his team’s overall performance this year. Throughout the season, he frequently talked about how his program’s games were “not to the LSU standard of performance.”

Column: Future is bright for LSU after Tigers move on from Pelini

The LSU Tigers capped off their season with a 53-48 victory over the Ole Miss Rebels. This marked the 5th time on the season the LSU defense a…

This job calls for near perfection without the pressure of coming off a national championship season, and these moves seem like Orgeron was made painfully aware of this truth by his superiors at the season’s conclusion.

While the coaching staff is feeling the effects of turnover, player retention has been very promising for LSU thus far.

Eighteen of 22 starters have announced their return for next season. The defense will miss Stevens and Jabril Cox, but the remaining defensive starters will use their experience to bring back LSU’s defensive pedigree.

Orgeron worked hard to get all his offensive linemen back for another year, going so far as to take them out for shrimp po-boys after the season ended.

“We are going to have more guys staying than we’ve had more guys leaving in the past. I’m going to talk to them. Especially on the offensive line,” Orgeron promised.

Minus Terrace Marshall Jr., Racey McMath and Arik Gilbert, who has entered the transfer portal, every offensive player will return to play in an offense soon to be designed by a coaching duo recommended from a familiar name: Joe Brady. Orgeron introduced on Wednesday new offensive coordinator Jake Peetz and new passing game coordinator DJ Mangas, two coaches who worked under Brady for the Carolina Panthers this past season.

“We leaned hard on Joe Brady, who we thought was instrumental in helping us win a championship,” Orgeron said in their intro press conference Wednesday. “These two young men come highly recommended.”

LSU also boasts the No. 5 recruiting class according to 247Sports. Premier homegrown talent like Maason Smith and Sage Ryan had wild recruitments but ultimately chose to stay home and continue the tradition of Louisiana talent coming to Baton Rouge to become NFL-ready talent.

There is undeniable optimism springing from the program like a waterline that has just had its pressure released. Finally, the nightmare season LSU dreaded is over, and the team can flow according to its own pace and style.

Orgeron has promised LSU fans a national championship level program, a hefty covenant to fulfill with a demanding client. He knows deliverance is not just in the job description; it’s a mandate that if left unsatisfied, would result in the end of the tenure of his dream job. It is a great reason why fans should be excited about the future.

The pressure is on.