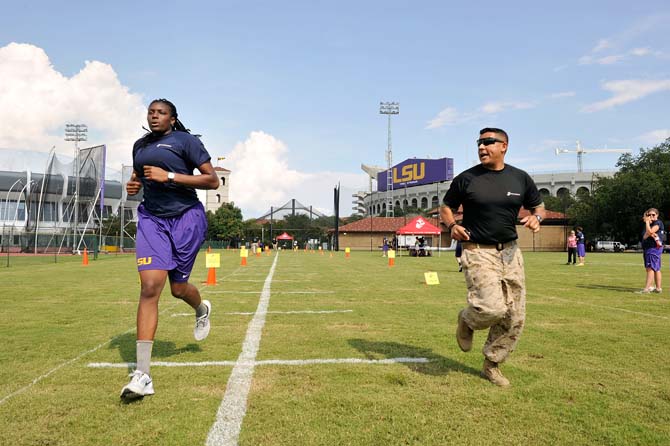 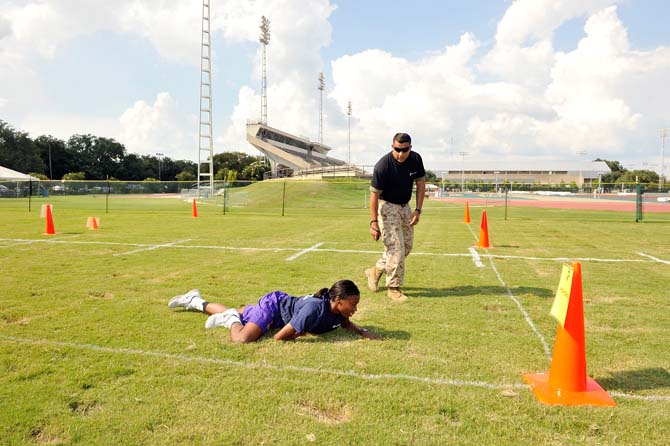 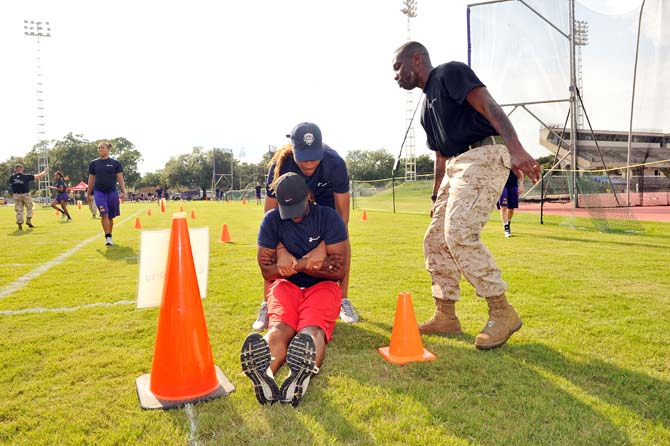 Sometimes a coach needs to think outside the box to manifest the kind of unity a team needs to succeed.

This fall, Caldwell invited a group of U.S. Marines to train her team and help them stay in shape.

“In Spain, we battled together, but this is taking it to a whole new level,” said senior forward Theresa Plaisance. “We were really grinding it out together, beating the odds in the grass, outside and in the sun. We’re really getting to compete together as a team. It was tough, but it was a lot of fun.”

More than just the added conditioning the training gave the team, the experience was helped the team come together, Caldwell said.

With five newcomers to what was a veteran-laden roster last season, the team-building exercise could prove crucial at the start of the season.

One of the things uniting the team is Caldwell’s and her coaching staff’s willingness to participate in these type of events with the team, Caldwell said.

“The great thing about my staff is that we are so hands-on,” Caldwell said in a news release. “Sometimes it’s better being side by side with your team opposed to always being in the back.”

The relationship between Caldwell and the Marines began last year during the Final Four in New Orleans, Caldwell said.

When she met with the Marines, she asked them questions about the teamwork and toughness required for them to succeed within the armed forces.

“We followed up with that conversation and then connected with the Marines here on campus and just tapped into them,” Caldwell said. “They have been nothing but unbelievable in allowing us to see the parallels between [ourselves].”

The team had a “briefing” where the Marines brought a PowerPoint presentation showing several of the key points they used to be successful, but three things in particular stood out, Caldwell said.

“The three traits that really stood out to us were having passion and really loving what it is that you do,” Caldwell said. “And then obviously we wanted to be sure as representatives of this program of what our character was and what we stood for.”

The team went through a gauntlet of physical drills, including carrying two 30-pound

ammunition cans for 75 yards and “casualty lifting” teammates up to 25 yards.

LSU also went through what the Marines called the combat fitness test, which Caldwell described as the toughest conditioning the team, or herself, has ever done.

“It was by far the toughest training I ever went through,” Caldwell said. “And I played for coach [Pat Summitt] and everyone thought that she was crazy. I’d just say she was intense, but it was definitely an experience I know my team will take with them.”

“Through it all we’re going to go through it with them,” Caldwell said. “When they hurt, we hurt. When they’re happy, we’re happy, but it’s a unique dynamic you build with your team and our players’ happiness is the most important thing.”

Rain showers in the evening will evolve into a more steady rain overnight. Low 47F. Winds light and variable. Chance of rain 80%.

Rain showers in the evening will evolve into a more steady rain overnight. Low 47F. Winds light and variable. Chance of rain 80%.

A few clouds from time to time. Low 54F. Winds light and variable.